Thank you to George Washington University for hosting this SNEC Symposium

The 20-21 March Symposium at GWU left me overwhelmed and speechless at the honor done to my work with Fuller. May I say that there is no group of people imaginable--none--from whom I would rather be recognized. Praise means little unless it comes from people as knowledgeable of synergetics as the SNEC attendees. Such encomia have given me with the wonderful feeling that one has not wasted one's time.

As for the symposium itself, I think all of the presentations--taken together and in their highly varying fields--demonstrated and documented two overlapping themes. First, they were all interaccommodating (Bucky word), not contradicting or competing with each other, and showing mutually supporting synergetic applications. Second, each presenter seemed to agree that Fuller's work has not yet come into the recognition it deserves--but that it will absolutely do so in the near term course of social and industrial evolution.

For those reasons SNEC has a continuing, vital, stimulating and catalytic role to play. In this cause I wish you and all your cohorts continuing success. (Also it's fun!) 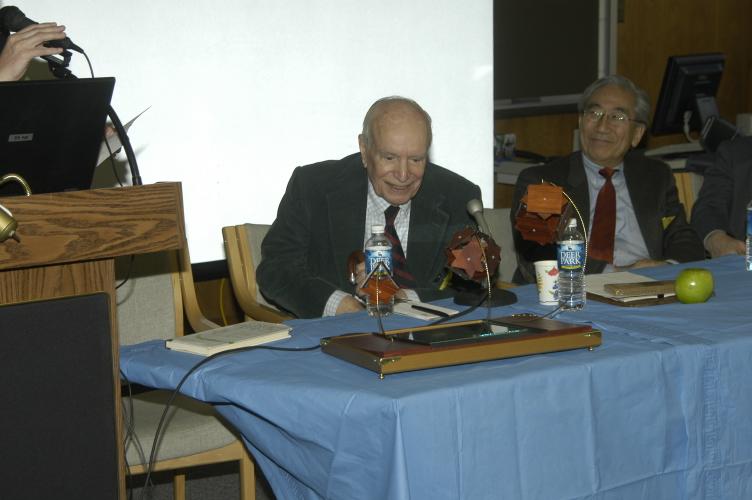 Thanks to Al Doolittle, we now have 448 photos of the SNEC Cosmic Fishing Symposium on-line!

From energy in a ring to a revolution with polyhedra, the SNEC Symposium this spring was not only a tribute to Ed Applewhite, Bucky Fuller's collaborator on Synergetics, but also an opportunity to hear other Synergeticists discuss their work. Ed contributed to a panel discussion that started off the meeting talking about his life after leaving the CIA and devoting his time to compiling Fuller's notes and prodding and probing to collect the information that Fuller didn't have the time to organize. Ed delved into the way Fuller worked, no corrections, only additions, beginning with the holes and building on momentum. What we all probably enjoyed the best was Ed's insight into Fuller's inspirations: his own experiential mathematics, Kepler, Gauss, Coxeter, Von Bertalanffy, Poe; collaborators Duncan Stuart, Peter Pearce, Keith Critchlow, Ann Griswold Tyng, Ed Schlossberg, Joe Clinton and Olney Reamer. After Ed, Shoji Sadao talked about the architectural work. Bonnie DeVarco asked what had happened in the years between the failure of the Dymaxion House and the successes of the Dome. The only real clue was that Fuller was intent on learning from his failures. Kirby Urner expressed his optimism in the connections and modeling that computers will provide. John Belt paid his tribute poetically giving Ed a few primitive computer items with Fulleresque names. Bonnie DeVarco presented The Documentarian's Documentarian - A Tribute to E.J.Applewhite (Text) (MS Word). After Bonnie's tribute, Joe Clinton presented Ed with the first Cosmic Fishing Award (photo of Ed with the Cosmic Fishing Award and Synergetics Dictionary).

I loved that so many different angles of synergetics were explored at the conference.

Ed Applewhite reported that Bucky always added to his writing and did NOT erase! That will stick with me.
-- Dick Fischbeck

It was interesting to hear from and meet Fuller's associates and most befitting they were honored. [...] It caught me up on what I had missed ever since leaving Bucky's world in 1966 and my return in the 1990's after spending many years on my own working on structure theory in other parts of the world for many years. The conference afforded me the opportunity of looking into what others may have done with structure research.
[...]Everything about the two days was fun, interesting, and hopeful.
--Don Briddell

Next Thomas Zung talked about the Fuller Stamp that will be coming out in the summer (and a Noguchi one) and the efforts that went into making that happen (two documents were included in a handout for attendees). He announced that the Fuller Institute is moving to Brooklyn. He briefly introduced Bob Marshall's work on numeronomy, a system based on 9's and 11's. Although Thomas passed around one of Marshall's posters, it seems essential that Bob presents his work in order to to get a better idea of it's meaning. Bob is looking for publication. Everyone also received a letter from Buckminster Fuller to Bob Marshall dated March 3, 1981.

The balance between the formal content of the presentations, personal experience sharing, and reinforcing the common conceptual foundation that connected everyone was very special.
-- Howard Brown

Edward Suzuki gave his atommetrics presentation, an architect's approach to understanding the atom. He told how he's been swimming against today's current of electron cloud theories. His system is quite logical in terms of the geometries that have been found and verifiable by what is known about atomic interactions, but cannot be taken in a literal sense because of the dynamic structure involved in atoms constantly in motion. He's predicting the unpredictable according to most current atomic modeling. Suzuki's hope is to predict new molecules that if produced then will suggest the efficacy of his models. Shape and orientation are maintained by the tension and compression forces of tensegrity. A question was posed as a suggestion for further study: how do the electrons maintain synchronization around two different sized atoms, if the electrons go at the same speed but different distances?

Jeannie Moberly and Chris Fearnley gave a talk on supercircles, a method of making modules for building great circle polyhedral models. Dick Fischbeck pointed out that Jean Pierre Petit uses the word Negacone to describe the procedure of adding a sector to a plane. This seems to be the prior art that is most related to our supercircle approach, but Petit does not investigate great circle polyhedra. Chris passed out copies of his compilation The Triangle: A One-Page Primer.

The meeting was adjourned to a nearby restaurant where as we all gorged ourselves on pizza, the talk ranged from encircling the Earth with nano tubes to the miracles of a triangular bypass, then we all went off to rest up for the day ahead.

To me, the work Fuller started is unfinished. The large questions concerning structure were still to be answered. It is those big questions that interest me. I came to the conference to see if anyone else shared that belief and was pursuing basic research. It seemed the most fruitful research is occurring tangential to that of Fuller's primary interest, that of structural research. The tangential avenues of research are where the Fuller movement is creating interest and excitement. What I saw from the conference is that Fuller's ideas have ramifications in all the sciences because he was dealing not with the details of structure but the concept of structure itself. He is a mathematician, a geometer, whose geometry other disciplines are now finding useful.
-- Don Briddell

Sunday morning started with a presentation by Joe Clinton on the Design Science Method. Though this process is by now well documented, tried and true, it is yet unorthodox and on the cutting edge, but slipping into mainstream. Briefly outlined, the method starts with a Frame of Reference where the systems are seen as a whole, starting with the universe and using the generalized laws of nature. Then comes the Recognition of a Problem, investigating the background and applicable tools. The Omni-Directional Halo opens a designer to look beyond the typical patterns of thought. Only at this point is the Statement of the Problem made, defined in terms of function. Then the Design Science Tools are brought out to begin tackling the problem. After arriving at various solutions they are tested in the Continuum or Eternal Spiral. Joe's graphical computer presentation which featured an example of his own work was fascinating.

Steve Levin gave a delightful talk on The Tensegrity-Truss as a Model for Spine Mechanics: Biotensegrity, which though technical was easily understood by those outside his field. His humorous lever man - foam man - and tensegrity man models were especially memorable.

Marvin Solit gave a workshop on "Biotensegrity and the Geometry of Healing" that went further into the subliminal understanding of human beings as tensegrity structures describing his unconventional approach to healing that flows with the energies rather than controlling or fighting them. We practiced letting our bodies go where they wanted rather than enforcing on the body what we thought it should do. Marvin calls his approach "Non-Directed Body Movement" (NDBM).

Digger O'Toole gave an enthusiastic hands-on demonstration of synergy rings, his modeling system along with advice to those seeking markets for their work to keep looking for venues.

Before and after Digger's talk there were several impromptu introductions by some of the attendees who we're hoping to hear more from as time goes on. Howard Brown is responsible for incorporating the world Game. Cornelius Crane of RBF Dome NFP is raising money for restoration of Bucky's domes. The latest news is that they succeeded in getting Fuller's Dome home in Carbondale added to the Landmarks Preservation Council of Illinois list of the Ten Most Endangered Historic Places in Illinois. Don Briddell showed a model with tubes and sticks and an inner tetrahedron, briefly introducing his Structheory which we're all looking forward to learning more about. Roger Tobie showed a tensegrity model whose intriguing twist angle is always a whole fraction and constant regardless of the proportions of the model. Robert Duchesnay spoke about his work saving the Montreal dome and showed some slides documenting the domes of Fuller. Todd Ulrich showed via computer his globes and fly-by demonstration. Al Doolittle gave us a little history of his work with New Alchemy. Bill Perk, who brought Fuller to Carbondale, offered a taste of his OK Fuller Beer which we're all looking forward to sampling again in the future.

The promotional flyer for this Symposium

Return to the SNEC web site

Please send comments and suggestions to the SNEC webmaster.